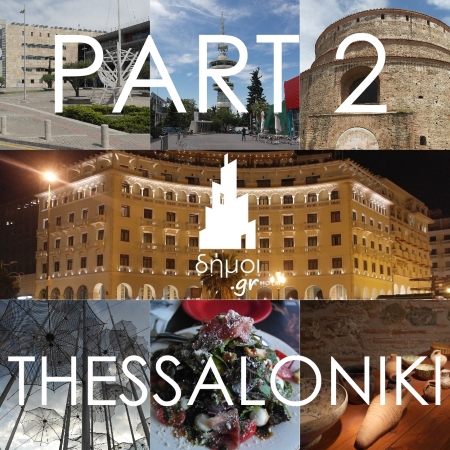 Travelling
18 May 2019by Συντάκτης0 comments

We traveled with DHMOI.GR in beautiful Thessaloniki and we wrote about everything we saw (Part 2)

The Arch of Galerius

We continue our mission in Thessaloniki walking downtown. There we found one of the most characteristic monuments of the city. This was the triumphant Arch of Galerius, also known as Kamara. The monument reminiscent of the Arc de Triumph in Paris. It is located on the upper side of Egnatia Street, in front of the Orthodox Christian Church of the “Panagia tis Deksias”. It is a short distance from the Rotonda. It is one of the most famous meeting places of the residents and visitors in downtown.

Kamara is a construction of the era of the Roman “Tetrarchy” (305 A.D.) and constitutes the one part (Western) of a roofed stoa, formed by arches. It was built to commemorate the Roman Emperor Galerius, when he returned victorious in the city (around 306 A.D.) after his winning wars against the Persians.

The details of the embossed designs in the 2 pillars that support the arch are very impressive. These reliefs depict the victory of Galerius against Narses. Kamara’s art of the reliefs is narrative and at the same time decorative. The main characteristic is the inflation of performances and forms. For more information about the reliefs of Kamara you can find here.

A few meters further is the impressive round building of Rotonda, which is a UNESCO World Heritage site. The Rotonda is a vaulted round building of the 4th century in Thessaloniki, similar to the pantheon of Rome, and was destined for a temple of Zeus. Due to its non-use, it was transformed during the years of Byzantium into a Christian temple and after the liberation of Thessaloniki, in 1912, it was dedicated to Saint George.

It was built in the years of the Emperor Galerius around 304 A.D. and was intended as a temple of Zeus or Kaveiron, or as a mausoleum of Galerius. However, due to the sudden death of Galerius in 311 A.D., the Rotunda remained vacant without use. Later it was used with a different function by people of the Near East.

Unfortunately the day the we visited it, Rotonda was closed, so we hadn’t the opportunity to admire the interior space, which is full of impressive mosaics and hagiographies.

The Rotonda was transformed into a mosque in 1590 A.D. by Sinan Pasha who undertook the construction of the minaret that time. A part of this remains until today.

The International Exhibition of Thessaloniki

On April 28, 1925 at a period that the “exhibition idea” was dominating in Europe, the congressman Nikolaos Germanos, submits to the Greek Ministry of Economy the innovative proposal for an international exhibition, the first in Greece. He asks for permission to fulfill his inspiration. He finally took it and was immediately anointed as the spiritual father of IET.

From October 3, 1926 till today (except for the decade 1940-1950 because of the WWII.) The Thessaloniki International Fair is a pole of attraction for the largest Greek and foreign entrepreneurs. In 1999, the National Exhibition Center was broken down into two companies, IET and HELEXPO, when in 2013 the IET HELEXPO was reunited in a common corporate form.

In our visit to the exhibition area, we made a tour and spoke with producers of traditional products of Crete. The exhibition was called “Crete: the Big meeting”. We tasted original flavors of pasteli, local cheese, honey and wine. Crete is also famous for the high quality and nutritional value of its products and the producers had prove it once again.

Before leaving the exhibition hall we enjoyed our coffee at the Café-Bar which is hosted in the last floor of OTE Tower. The view was really impressive and within an hour the cafeteria has been rotated 360 degrees so you have a complete, panoramic view of Thessaloniki from above.

The OTE Tower is a telecommunication tower of 76 meters high. It was constructed in 1970 in the designs of architect Al. Anastasiades, and was used for several years as a kiosk of the Hellenic Telecommunications Organization at the International Fair of Salonica. It was renovated internally in 2005. Today, it is used by the cellphone network company Cosmote.

Just after our coffee at OTE Tower, we visited the new Town Hall of Thessaloniki. The imposing, modern building complex, work of architects Tassos and Dimitris Biris, began it’s construction in 2005 and was completed in 2010.

The complex is divided into independent building units, organized around an open-air communal area. The individual modules are lowered gradually, so that in the face of the 3rd of September Street with the King George Street the building ends up as a two-floor building. External investment of marble and metal blinds complete the final image.

In 2011 the new Town Hall won the first prize (one of three equally prizes) in the international architectural competition for the “most friendly public building”, launched by the International Association of Architects (U. I. A) in its conference in Tokyo.

Internally the industrial style prevails with sufficient natural illumination on the upper floors. The walls in many places are “bare” of lining, dominating the gray color of the cement. They are decorated with copies of old photographs of the city and portraits of all the previously-mayors of Thessaloniki.

There is also a 3D model where you can easily locate the main points of the city.

We were standing outside of the Main Council’s Hall and asked if we could speak with the mayor but at the time of our visit he was unavailable.

On the contrary, in the courtyard of the Town Hall we met candidates with whom we had a brief discussion about what’s new in the city. We were informed that for first time in the next municipal elections voters will vote separately for community entrepreneurs (if a municipality is made up of individual communities) and separately for municipal entrepreneurs, who will be the only members who will participate in the Municipal Council and have the right to vote.

Don’t miss at one of our next articles the exclusive interview of a famous candidate for the upcoming Municipal Elections. However, the thing that made us particularly impression during our walking in downtown was the complete absence of stands of candidates.

Our last stop, before saying goodbye to the ever-charming Thessaloniki, was none other than the timeless symbol of the city, the White Tower (Lefkos Pyrgos)

The White Tower of Thessaloniki is a defensive work of Ottoman construction of the 15th century (probably built between 1450-70). Today it is considered as a characteristic monument of Thessaloniki and is what has been saved from the demolished Ottoman fortification of the city. The current form of the tower replaced the Byzantine fortification of the 12th century, that was be using subsequently as a Genetsari guard accommodation place and as a prison for the doomed with death penalty prisoners.

Today Lefkos Pyrgos operates as a museum and is one of the most famous building-symbols of all Greek cities. It has 6 floors, is 34 meters high and 70 meters perimeter.

Since 2008, it houses a permanent exhibition dedicated to the historical route of the city from its founding to the modern era, transforming the interior of Pyrgos into one of the most original museums ever seen. Different thematic units on each floor that travel you back in time. The extended use of multimedia, (images, videos and voice) combined with the preservable relics and the stone environment transforms the experience of your visit to something unique.

Goodbye Thessaloniki! Or even better “See you soon!”

Passing through the café and the souvenirs store at the last floor, we got to the roof of the tower. It’s sure that anyone who will stare at Thessaloniki from this height, he will think that this view is amazing. It’s a big city with population over than 325,000 citizens. However, the combination of sea, the trees, the Parks, with the variety of choices that offers, is something that makes her unique. See you soon then!

“Travelling with DHMOI.GR in Thessaloniki” PART 2 is ended here. If you haven’t read the 1st part, you can do it here.

Presentation of the 2nd Gluten Free Map of Thessaloniki 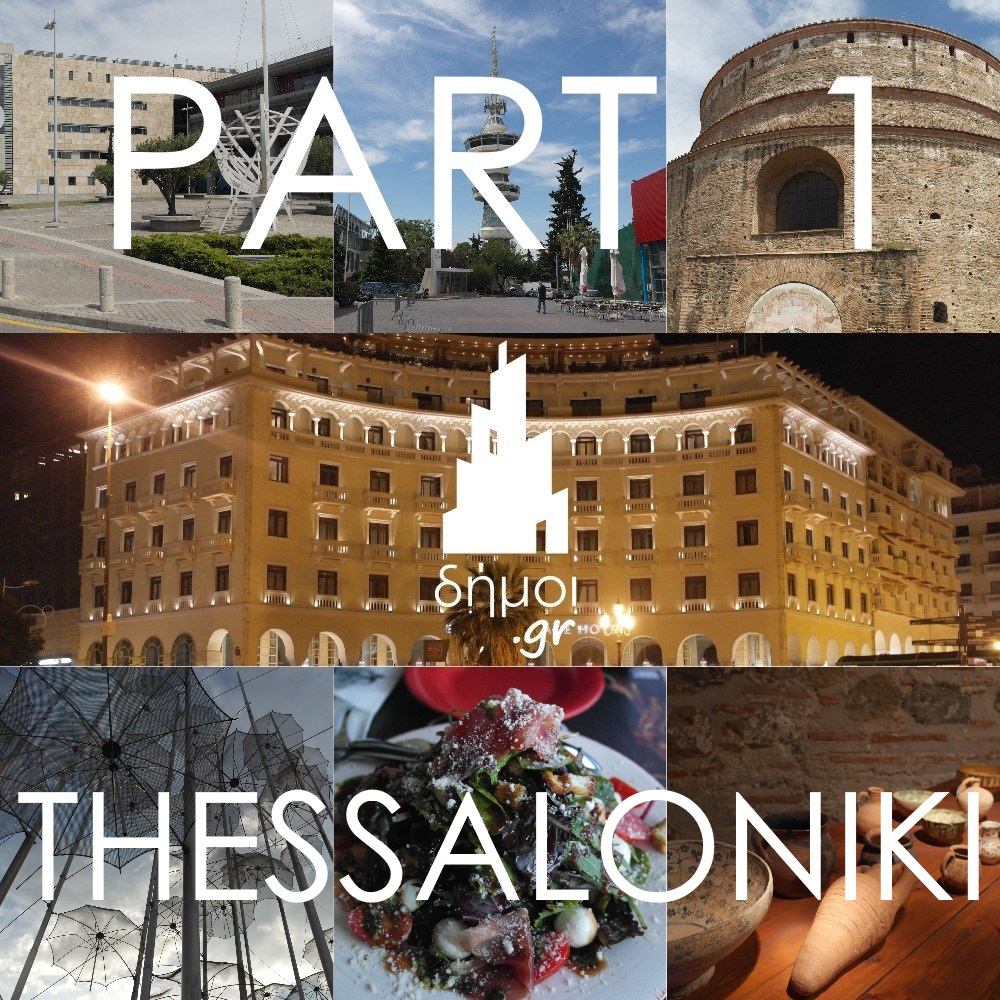 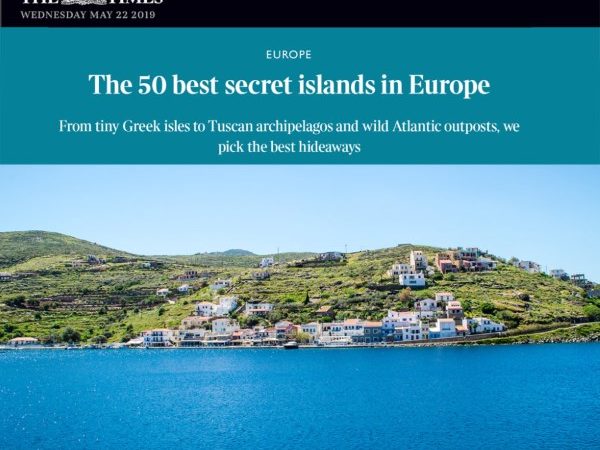